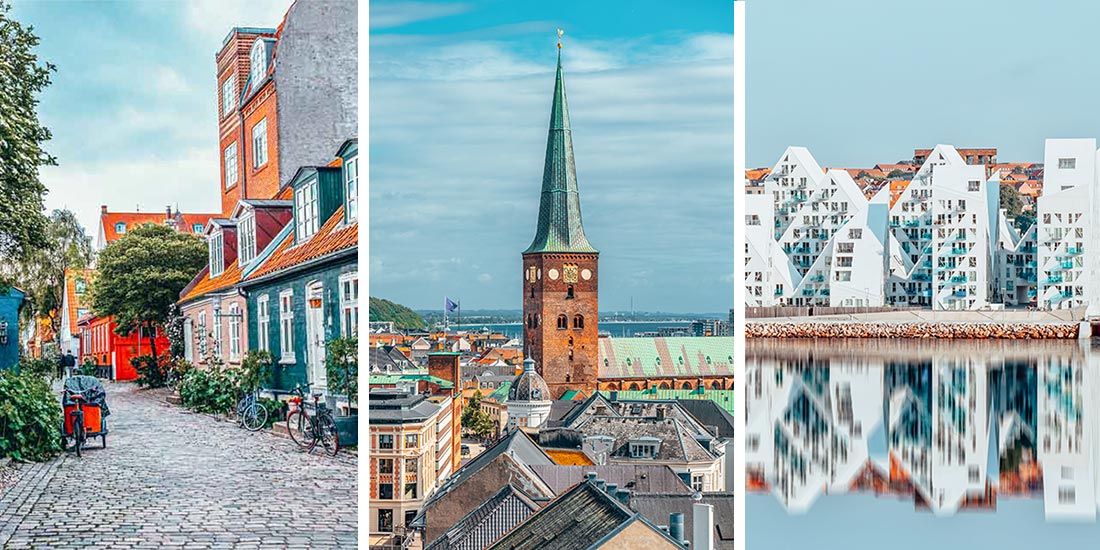 Things are changing rapidly – please double check what’s open before your trip. And be sure to follow all local guidelines to keep yourself and others safe! Finally, ads are how we pay our bills and keep our blog free for you to enjoy. We also use affiliate links; if you make a purchase through them, we may receive a small commission at no cost to you.

Walk through a rainbow. Time-travel to a historic Danish village. Learn about vikings. Relax on the beach. Feed deer near a royal palace. Aarhus, Denmark is full of surprises and charm, much like Denmark itself!

Denmark is a small country with a rich history and culture that many of us know and love – think Vikings, fairytales, hygge, etc. But many people only know Denmark’s capital, Copenhagen, without realizing that this wonderful little country has an often-overlooked little sister city that will give you a different taste of this nordic country: Aarhus.

Aarhus is the second-largest city in Denmark, and though many people outside of Denmark aren’t aware of its existence, its rich cultural heritage makes it a standout on its own – not to mention the charming historical Old Town, stunning modern architecture, incredible food, beautiful beaches, and a theme park in the center of town!

Aarhus was founded as a small Viking settlement over 1250 years ago on the northern eastern coast of Jutland, the large peninsula of Denmark that is connected to mainland Europe. The Vikings built their fortified settlement near the mouth of the river, and the old Danish word for “river mouth” was “AROS,” which morphed into “Aarhus” of today. Its protected strategic location in a natural fjord helped Aarhus grow into an important port for the area.

In 1441, Aarhus was granted prestigious “Market Town” privileges, meaning the town was allowed by the Danish ruler to host a market – a really big deal at the time – which helped the town to become the economic and cultural center of Jutland.

Aarhus eventually grew to become the second-largest city in Denmark, with a distinct personality as an art lover’s paradise, a vibrant center of learning (one of Scandinavia’s largest universities is located in the city), and a cultural oasis with a plethora of museums, restaurants and modern architecture.

Today Aarhus is home to only 350k people, and although it doesn’t have any famous landmarks, buildings, or monuments, what it does have is history, culture, and plenty of “Hygge”. The people you’ll meet in Aarhus are the friendliest bunch in the country and the happiest! Aarhus’ nickname among the Danes was “Smilets By” – or the Smiling City, which the city has now embraced as its motto: “City of Smiles.”

We are lucky enough to have Danish Natives Nick and Kia give us the scoop about this historic and welcoming “city of smiles”. Take it away, friends!

Planning a trip to Denmark? Take a look at our other posts:

Looking for more resources for a trip to Europe? Check out a few of our other travel guides:

15 Things to Do in Aarhus, Denmark – the “City of Smiles”