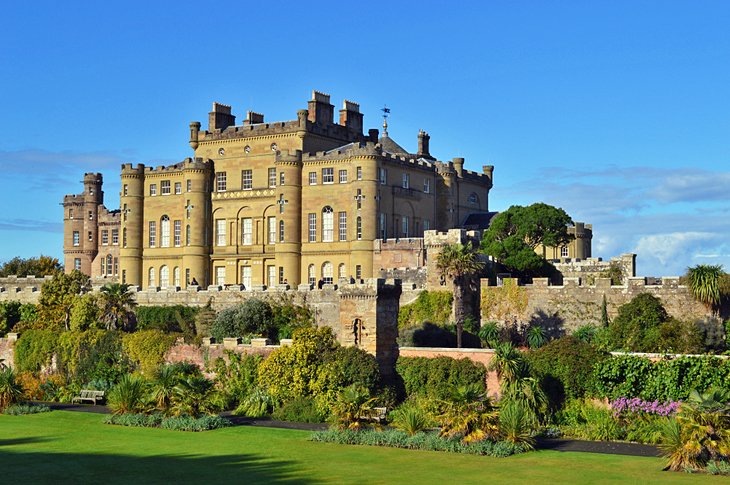 Inveraray Castle is a country house located near the county of Argyll on the Western side of Scotland. The Castle is one of the finest examples of Gothic architecture. It has been the seat of Argyll Dukes and chiefs of Clan Campbell since the 18th Century. The construction of the Castle began in 1743, and the architecture replaced the earlier design that was built in the early 15th Century. Later in 1975, fire struck Inveraray severely, and the 12th Duke and his family lived in the basement while restorations were carried out. Today, the Castle is open to visitors. It houses unique collections that include over 1300 swords, pikes, muskets and other weapons. The 13th Duke and his family live in private apartments of the Castle on two floors.

Hauntings of the Inveraray Castle

Many haunting appearances have happened at the Inveraray Castle. Some of the occurrences date back to the previous old structure on the site. In 1644, a young Irish boy who was playing the harp was killed brutally. The Marquis’s men slaughtered the boy in a rage that he was working for their sworn enemy. They left his quartered body on the Duke’s bed. Many legends have reported that the boy’s spirit moves around the bed that is now fixed in the MacArthur room of the current site. In other reports, staff and visitors noticed the bed moving on its own. They have also experienced cold spots and headaches in the room. On several occasions, harp music has been heard with the sound of books being thrown. Sometimes visitors are often seen laughing in the library all of a sudden for no reason.

It is believed that there is a death omen attached with the phantom harpist and the room of MacArthur. It is also reported that harp music can be heard in the room whenever a member of the family is about to pass away. This incident was last reported in 1949 when the 10th duke died. Another death incident happened when the ghost ship claimed the life of the Clan Campbell Chief. Another ghost is a young woman who was murdered by Jacobites. Many have seen the spirit roaming around the Castle in a grey gown and therefore named as “the Grey Lady” though her exact identity is still unknown.

What to See and Do in Inveraray Castle?

Inveraray is undoubtedly one of the most beautiful castles in Scotland famous for its history and of course, the hauntings. But there is a lot more to it. Here are a few things to do at the Castle:

The Grounds and Garden

The garden is worth a visit when you are at the Castle. Spanning across the area of 16 acres, there are formal lawns, stunning flowerbeds, park and woodland. Visit the garden and enjoy a lovely afternoon here.

The traditional tearoom of the Castle offers a wide range of coffee, teas, snacks, ice cream and light meals all made fresh and hot. The tearoom is run by the Duchess and serves mouthwatering menu to the visitors.

Visit the gift shop to buy a vast array of books and gifts. There are several souvenirs including Scottish gifts, Clan Campbell, Scottish produced scarves and blankets and many other things.

Walking routes at the Castle are the best way to explore the Argyll Estate dating back to the mid 17th Century. A few of the walking routes have been decorated for the visitors who wish to explore the Inveraray Estate and admire the breathtaking views.

You can not only stalk but also shoot on the Isle of Tiree at the Argyll Estates that is covering the area of over 50,000 acres.

To know about tickets and other information about the Castle, visit their website.